Looking at what was left of his little brown friend smoldering in the grass, tears started to form in Esoom’s eyes. Padme ran down the ramp aiming her gun in the direction of the shots, she saw a lone security droid coming out of a clearing; as the droid started to take aim at her she dive rolled and shot hitting the red shouldered droid right in the neck. The droid’s head tumbled backwards as its body fell limp.
Suddenly five more security droids came out of the clearing. The Naboo security that came with the group put themselves between the droids and the Ithorians then open fired. As soon as the fifth droid fell ten more came out to take their place, then ten more came after that. 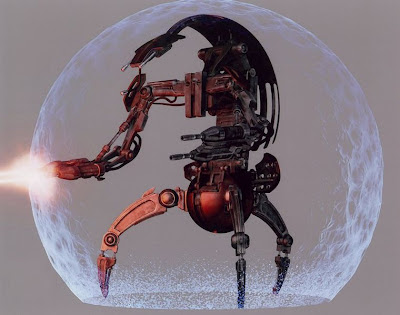 Three of the Naboo security personel were hit and fell to the ground as an even bigger threat came rolling up; a Destroyer droid, it rolled at top speed around the Naboo and deployed next to the Ithorians with its shields up and his gun arms trained on them.
The security droids then stopped firing as another OOM series droid came out of the clearing.
“Drop your weapons and surrender or I will give the order to shoot that Hammerhead scum!” A yellow painted Officer droid barked out loud. The Naboo security dropped their weapons and put their hands behind their heads, the three wounded ones just sat on the ground clutching the non-fatal wounds they had received; Padme dropped her weapon as well.

“We are taking all of you and this ship off this planet.” The commander droid exclaimed.” Everyone will get in a line and board this ship.”
Everyone got in a line before advancing to the ship with a line of security droids on either side and the destroyer droid in back. The yellow OOM droid went to the head of the group were the remains of R2-CM laid and kicked it in the dome.
“Leave him alone!” Esoom yelled snapping out of his trance; he was in still standing on the foot ramp of the ship.
“What are you going to do about it Hammerhead!” The officer yelled back “Put down that gun and get in line!”
Esoom looked down at his hand not realizing he still had the gun but did not drop it.
The battle droid officer quickly grabbed Padme from the front of the line and held its gun under her chin. “I said drop your weapon or the female gets it!”
Esoom slowly dropped his gun to the floor in front of him.
“I think I must make you an example to the others that we will not tolerate any insurrection.” The droid pushed Padme to the ground hard and pointing its gun to the top of her head. “ Say goodbye to your female friend.”
“No! Please No!” Esoom begged
“Too late!”
The officer droid was just about to squeeze the trigger when over the Landing crafts outer speaker came the voice of R2-D2. At the same time the C-9979’s wing tip blaster cannons shot down the line of red security droids on either side of the prisoners then angled in at the back to take out the Destroyer droid. Everyone but Esoom duct when the ship started firing, he reached down and grabbed his gun. He leveled his blaster and shot the officer’s arm off that was holding the gun. Esoom then angrily walked up to the now decapitated droid and knocked it to the ground; he raise his gun up like a club and proceeded to bash the droid repeatedly long after the droid stopped functioning.
“Esoom stop! Its over now, everyone is safe.” Padme exclaimed as she grabbed one of his arms to get him to stop. After a moment he fell to his knees in front of his metal friend and started to cry.
Padme then said that the days work is over and told the Naboo guards and scientists to take the other Ithorians back to the city and that she and Esoom will be along in a moment. The leader of the Ithorians approached as the others were boarding the speeders.
“Esoom Mendo you have broken the law of nonviolence and attacked out of anger and hate. You are hereby banished from us and Ithor till we fell you have paid for your crimes.....I am sorry my friend but you know this is our way.”
“What!” Padme exclaimed, “He saved my life and this is how you thank him!”
“It is our way young handmaiden; our laws must be enforced in this matter.” Without waiting for a reply the Ithorian leader turned, grabbed the remains of the rare plant and headed to a waiting speeder and left.
Padme let Esoom sit and greave for the loss of his droid and his people. She proceeded to go back to the bridge of the ship to collect R2-D2 and deal with the pilot droids.
After a while Padme came back out of the ship with R2 and asked Esoom to get up and come back to Theed with her. Esoom wearily agreed and went back with her. When they got back she told Esoom to go to his room and get some rest and that she would help him straighten out this mess in the morning.
This was the saddest and longest night he had ever experienced. Gripped by grief he was not able to sleep the whole night.
The next morning one of the queen’s representatives came for him and asked him to follow. 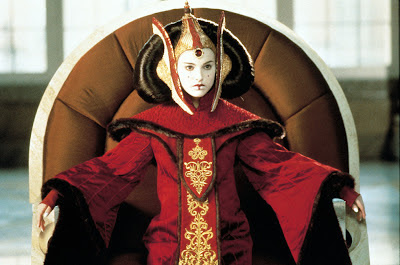 Soon they entered a great hall were diplomats, gungans, and the queen were discussing maters of State. The Queen seeing Esoom approach got up from her seat and walked over to the humbled Ithorian.
“I am sorry that your people have exiled you my brother; though I may not agree with their ruling I must bide by it. I feel as though I am personally responsible for what happened but if it weren't for you my handmaiden would now be dead.”
“You are welcome Queen Amidala; I would do the same for an living life form.” Esoom shakily said.
“ I do have some good news for you, the remains of the plant that your droid found were still in tacked enough to grow new plants from.”
“It is good to hear that CM’s final efforts were not in vein and that the plant can be saved.”
“Speaking of your friend you will be happy to know that his memory core was not damaged and he is in one of our droid repair areas right now.”
“Oh thank you my Queen! Thank You...” The Ithorian exclaimed.
“One more thing needs addressed then we must part ways. Sense you are not able to work with the other Ithorians and they say we must have you leave you will only have till tomorrow morning to put your droid back together.”
“Where will I go? I have no money and no ship. What am I to do?”
“In the short time Padme spent with you she learned that she can trust you.” The queen uttered with the hint of a smile on her face. “That means that I can trust you as well, as a gift for saving my handmaiden I give you the salvage rights to the ship you two removed from the marsh. I did take the liberty of having the turrets disabled and the pilots memories adjusted to follow only your orders from now on. The ship dose not have a hyper drive but if you promise to continue your conservation techniques on other planets I'm sure I could have one adapted to work somewhat reliably. “
“Oh thank you my Queen! I am humbled by your generous offer.” Esoom bowed down to her respectfully.
“I am sorry Padme could not be here to see you off in person but she told me to thank you for your friendship. Go now and tend to your droid, your ship will be ready by morning and you must go. Perhaps in the future you will pass this way again when things are settled with your people.”
With two very big smiles on his face he said. “I understand your highness, may mother jungle watch over you.”
The Queen then went and sat back down and continued her other conversations where they left off.
Esoom was directed outside to a waiting speeder that would take him to the area where his droid was being held by another representative, he could not wait to see his friend functional again.
Email ThisBlogThis!Share to TwitterShare to FacebookShare to Pinterest