Sorry everyone, had been laid up for a week plus had some real life stuff to do. After running up and down the stairs a million times to get stuff for B9 I decided it was time to take him downstairs. What a pain that was! At least now I can works on him easier.  K-9 is coming along even though it does not look like it. I decided to try one more neck setup on him. The second one worked just like in the show but I hated having to let go of the button right when he hit the top or bottom just to keep it there. Time for some limit switches! 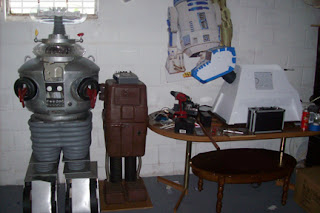 No comments:
Email ThisBlogThis!Share to TwitterShare to FacebookShare to Pinterest
Newer Posts Older Posts Home
Subscribe to: Posts (Atom)
Thank you for stopping by visitor...