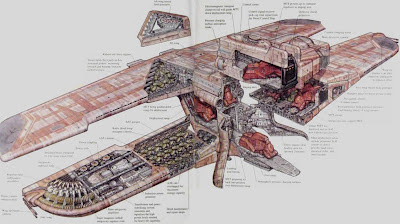 Aboard The Tree Hugger, Lihp was sleeping while all the pilot droids stood around doing nothing on the bridge. Patches was watching events on the holo-news looking for any news that might lead them to their first mission in stopping Eco terrorists. Suddenly a breaking story flashed on the screen, “An Ithorian that is wanted for questioning by local authorities in the Jedi temple for alleged connections to the Trade Federation is missing. Authorities want him alive and unharmed, he goes by the name Esoom Mendo, he should be considered armed and dangerous.” Then a rotating bust of Esoom’s image came up on the screen. Patches whistled wildly in surprise catching the attention of all the pilot droids.
Suddenly the news flickered as another signal forced its way threw. A man dressed in a blue senate guard uniform appeared in front of the little droid.
“I don’t have much time; they will trace my signal soon! Esoom is hiding in the lower levels in a repair shop of a friend. I know you are not in league with the Federation but you should go hide with Mr. Mendo before they impound your landing craft and you along with it. I am sending you his coordinates. The password is USED PARTS. Good luck!”
As the image started to fade Esoom plugged into the console and stored the coordinates directly to his memory unit so they could not be found in the ships records.
“Pilot droids! I want you all to shut down till I get back, if they break in and see you functioning they might shoot on site. There are to many of you to sneak threw the under levels undetected. Lihp and I will take the speeder and meet Esoom below.”
“Rodger, Rodger!”4791 said and they all compacted down into a fetal position in unison and shut down. 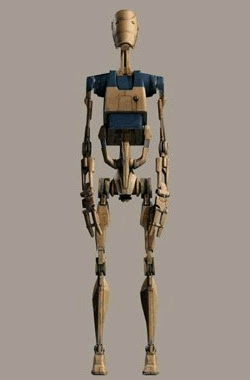 Patches was surprised they did not put up a fight and he hurried to the lift. Before heading down he put a few tack welds on the bridge doors, just enough to slow them down but not enough for them to rip the door to shreds.
Patches then went looking for his Jawa friend whistling for him as loud as his vocal system would let him.
“What is wrong astro droid?” Lihp yelled stumbling around a corner.
“Esoom in trouble! We must go get him!” Patches gurgled. ”Get the speeder ready, we are leaving!”
“What! Lihp want to know what happening first!”
“No time lets go before local security get here and arrests us too!”
The two of them rushed downstairs to the loading platform and hopped into the speeder. As soon as the bay doors opened wide enough Lihp shot the speeder out the opening. As they zoomed off Patches pushed a button on the speeder that shut and locked the doors of the landing craft tight. 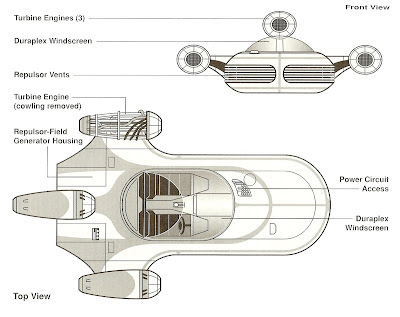 Patches rattled off directions as the Jawa did his best to follow. They headed straight down for several thousand feet then shot away from the general direction of the Temple above. Soon there was little traffic at all as the walls of the buildings got closer together and no surface light could be seen. Soon Lihp had to slow down as the walls got to close for two-way traffic and craft to safely navigate. Patches spit out some more directions and they headed down deeper into the older parts of the city. After a while they came to the coordinates that Patches was given. The only light came from the speeders console lights and a sign above a door that said Melac’s salvage. There was a small ledge in front of the door barely wide enough to land the speeder. The craft was in no condition to be trusted to hover by itself for long periods of time, along with the fact that someone might hop in it and steal it while it was running. After shutting down the speeder and activating the built in theft traps the both got out and carefully eased there way to the door.
It was an old fashioned door that had to be manually opened with a knob and it swung inward as it opened. As they entered the door hit a chime that made a noise that let whoever was here know someone came in. The room was surprisingly well lighted with a sitting area and a very well kept front desk near the back wall.
“I’m coming, be right with you!” Came an odd elderly voice from somewhere in another room.
Soon an elderly robed figure came in threw another door holding a thick black cane. Patches had no record of his species in his memory.
“Hello strange fellas, my name is Melac. How can I help you?”
Patches warbled out in his droid speak that he was looking for an Ithorian but Melac seemed not to understand.
“I'm sorry little droid but I can not understand you.”
The Jawa tried speaking for Patches in his crude broken version of the Basic he was trying to learn with no avail.
“I can kind of understand you but you are going to fast for my old Yarkora ears to hear.” Said Melac as he leaned harder onto his cane. He then scratched his head and re adjusted a pair of welding goggles he had atop it. 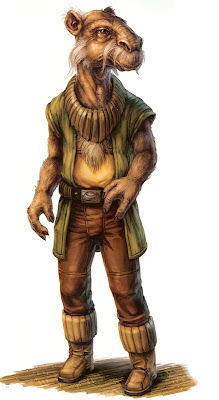 “We- look for Giant Man- long neck- name E-sooome.” Lihp said as slowly as his nervous mind would let him.
“E-sooome? Never heard of the name? I have never seen a long necked man in hear recently either? Are you sure you are in the right place?” The Yarkora then shot Patches a warm friendly smile.
“Tell him the password for me!” Patches said to Lihp.
“Jawa no know the words! E-sooome no teach yet.” Lihp then went and sat in a chair and folded his arms in defeat.
Patches let out a cry as he thought what to do. He suddenly remembered how he communicated to Esoom when his vocal system would not work on Naboo. He powered on his new front holoprojecter and produced an image of Esoom on the counter for Melac to see.
“Ah is this who you are looking for? An Ithorian, Hummm. Nope I have not seen one in a long while.” Melac proclaimed.
Patches then manipulated the holo to make different parts of recordings match up to make a sentence. “Looking-for-Esoom Mendo-Pass-Word-Used-Parts.”
Melac’s face changed, his ears perked up and a coy smile came across his wide lips. He sat up a little straighter taking his weight off his cane. “Well why didn’t you say so! Used Parts are always welcomed around here my little multicolored friend. As for your pitiful Jawa friend he will make an amusing pet.”
The camel like being pushed a hidden button and a thick blast door covered the antique one. The rear wall behind the counter lowered into the floor revealing a huge warehouse of striped down droids and vehicles.
Startled Lihp ran for the blast door and beat on it with his fists with no avail. Melac shrugged off his robe and stood straight up reveling that he was not old at all but quite muscular and young looking. He took his black cane and leveled it like a blaster and stung the helpless jawa repeatedly till he fell limp to the floor.
“Now you little tin can, we can do this the easy way or the hard way!”
Patches immediately deployed his hover pads and pushed them to full power. The little droid shot up towards the ceiling and hid behind a ceiling beam.
“Ha! You think you can escape from here! No droid ever has! Come down here or I will stun your stinky friend here into a permanent coma!” Melac yelled in a gruff voice while looking and pointing a finger in the astromechs direction with one hand and taking the cane and pointing it in the general direction of Lihp with the other. “I can wait here longer than you can; I have all the time in the world.”
Patched could not surrender and he knew it, if he did give up Lihp was doomed for sure as was Esoom if he was here. He opened up a side dome panel and deployed the gadget he had Lihp make. It was a swivel arm connected to the Gun that used to belong to the Gotal from the day before. It was modified so that Patches could trigger it himself and had it hooked into his own power supply for long durations of firing.
Patches carefully aimed at the Yarkora’s cane and fired breaking the weapon in two, throwing the muscular creature backwards. Patches immediately took the opportunity and momentarily turned the power off on his repulsor pads and fell from the ceiling while changing the setting on the blaster to full stung.
Melac sneered and put his goggles over his eyes and held the long straight part of his cane like a club. Right before Patches reached the floor he powered his repulser back on rocketing himself towards Melac.
Patched fired at the same time Melac swung. Both of them connected with their shots and were flung to the floor and skidded in opposite directions. The Yarkora slammed into the counter and slumped to the floor while Patched scraped along in a shower of sparks while loose parts flung off his dome from where he had been hit. The droid then rammed into a pile of stripped power converters headfirst.
Email ThisBlogThis!Share to TwitterShare to FacebookShare to Pinterest