Esoom’s mind drifted the harder he tried to concentrate, his thoughts went from the care and love he had teaching Patches back on the herd ship, to the anger and hate he had bashing the security droid on Naboo. Faces of family and friends flashed in his mind, his Elder’s words of trust to go on a mission of peace. The images got darker- images of pain and suffering, he saw a mirror image of himself with yellow eyes pushing himself into a dark pit, he was holding a chrome metal shaft with a glowing red blade of energy coming out of it.
“NO!” Esoom screamed as he jolted back awake. Sweat was running down his face even though the room was still quite cold. He took a second to get his thoughts and bearings in order and stood up. He had never seen such dark images before. The red bladed sword, could it have been a light saber? - He thought to himself. He had never seen a real one before, but knew only Jedi care them. He dismissed the thought and wiped the sweat away from his eyes, suddenly he felt the ship change direction and started to feel as if it were descending. The wall he was still leaning against slowly grew warmer so he knew they were about to land on the hot surface of the planet Tattooine. The sound of the landing gear lowering could be heard below as the comm system crackled to life, Patches’ happy voice could be heard over the speaker.
“Great job Patches, Esoom said as he pushed a reply button next to him. “Make sure you disable the bridge controls so the Pilots can’t use them and meet me by the foot ramp.” Esoom then proceeded down to the main doors and pushed a button that opened them wide, the hot dry air of the planet rushed in and sent chills over Esoom’s now warming skin. The double suns burned bright in the sky as he shielded his eyes from the suns. Soon Patches came wobbling down, his leg still giving him trouble.
The Ithorian kneeled down and patted him on the dome. “Well done my friend, you have done a great job getting us here, you are learning to face your fears of flying with great bravado.” Esoom said then standing up and taking a few steeps down the main ramp. “Lock the door of the ship and let’s go, we have a ways to walk to get to town.”
As they walked they could see Mos Espa in the distance. Esoom could not believe how barren the planet was even though back home on his herd ship there was a dome with a desert environment. The wind picked up and the sand stung Esoom’s eyes. Patches complained that sand was working its way behind his broken holo projector so Esoom ripped a strip of cloth from his own clothing and made a makeshift eye patch to go over the broken projector.
When they reached the town they were in awe of how many races of aliens roamed the streets. So as not to attracted any attention to themselves they went up to the first wares dealer they saw. She was an old human lady who was well worn from the years out under the twin suns but her eyes and smile still shown a playful glimmer of a young woman. 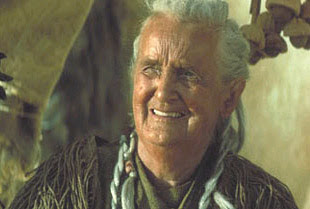 “Good day to you traveler my name is Jira, how can I help you." She said with many years of rehearsal behind her voice.
“I am looking for a junk dealer named Watto, would you know where I could find him?” Esoom said.
“That gas filled bug! What would a nice Ithorian like you want with a cruddy piece of Bantha fodder like him?” She said with much distain.
“A friend of mine named Padme said he would have the parts I need to fix my ship. Esoom respectfully replied.
“Ani’s friend Padme! Why did you not say so! Of course I will help you! How is Ani doing now anyway?” She responded with much glee.
“I know not whom you speak of Jira. So I have no news to give.”
“That's all right my friend, I'm sure he is helping many people now that he is no longer a slave to that Toydarian.” She said.
“Slave? Padme did not tell me he had slaves!” The Ithorian said with much alarm.
“Ani won his freedom from Watto in a pod race. To bad he could not free his mother from him, she is a lovely woman and just as kind hearted. At least Watto treats her better that some slave owners.”
“I was not aware there was slavery on this planet. “
Jira stood up tall and looked Esoom straight in the eyes and said, “If you do not want to become one yourself you need to be careful of who and what you talk about around here, understand.”
“I understand.”
Quickly the smile returned to Jira’s face, “Good! Now let me point you in the right direction to the junk dealer!”
The direction were clear as day and soon Esoom and Patches found themselves at the front door of Watto’s. Walking in they saw a mired of parts and droids. A bluish Toydarian saw them from behind the front counter and flew over to great them in a language Esoom was not familiar with.
“ I am looking for some parts for my Astromech friend here and some upgrades for a used hyper drive unit.” Esoom said. 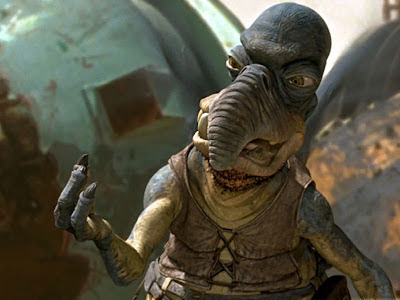 “Ah a Hammerhead! Strange to see one of you around here! I'm pretty sure I can help you find what your looking for but it won’t be cheap!” Watto said with a crooked smile and laugh.
“First off if you call me a Hammerhead again it will be the last, second from what I hear of your recent luck you are in no position to ask top dollar for anything.” Esoom said with two coy smiles.
Watto’s face grimaced, “ Just what I need! An Ithorian with an attitude! The last customer that needed a hyper drive swindled me! What kind a hyper drive you have anyway!”
“I have no idea to tell you the truth; I got it from the planet of Naboo.” Esoom said.
“Noobian!” Watto roared “ I hates the Noobian hyper drives!” Next you will be telling me all you have is Republic credits!”
“I don’t even have that.” Esoom frowned, “ All I have is a pile of Trade Federation Battle droids.”
Watto’s eyes widened his wings beat harder. “Battle droids you say! I know someone who might be interested in them. Maybe we can work out some kind a deal. As for your Astromech here we could work out a trade- say helping me clean up and watch this store for a few days while I settle a few depts I owe. My only slave’s son was lost to man who cheated me on a bet and now she does not want to work!”
“I think that might be acceptable as long as it is nothing illegal." Esoom said.
“Illegal! Me! I would never think such a thing!" Watto cackled. “Come, help me with some parts out back, we will go look at your ship when the suns are not so bright in the sky.”
Later in the evening Patches, Esoom and Watto, went to go look at the ship. Watto’s face froze when he seen the C-9979 Landing craft hanging there in front of him.
“How did you get such a ship! Did you kill someone from the Trade Federation to get it? She would be worth a few Peggat on the open market!” Watto said rubbing his greedy hands together.
“Don’t even think about it Watto! Or you will be finding yourself breathing sand underground!”
“Easy! Easy! I was only mentioning! Let’s see these droids and hyper drive you are talking about.” Watto exclaimed as he eagerly flew up the ramp.
After some discussion a deal was made and the Ithorian and Toydarian shook on it. Watto went back to his shop for the night while Esoom and Patches spent the night in the ship. Early the next morning Esoom woke to the sound of Patches hard at work.
“What are you doing my friend” Esoom asked?
“I do not trust Watto.”Patches beeped and whistled, “I am setting traps for anyone that tries to board our ship.”
“That is a good idea, just make sure your traps don’t hurt anyone toooooo badly.”
After Patches was done they returned to Watto’s junk shop. 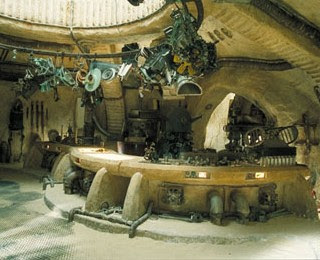 “Ah welcome Esoom I'm glad you are here, you two need to watch the store while I go meet with an ah- client. Feel free to work on your droid while I’m gone.” The Toydarian said without waiting for an answer and flew out the front door.
Over the next few hours Esoom fixed and tweaked Patches’ servos and motors. Soon the little astromech was rolling around like he was on greased rails; the rest of the time very few customers came threw and only needed minor things.
"HAHA!” Watto yelled as he came charging back into the store late in the afternoon. “I traded all the droid parts you have for a new and modified hyper drive that will work on your ship! Not to mention a nice profit for myself! Soon I just might get out from under all my bad depts.”
Watto then looked over at the astromech droid rolling around as if it were brand new. “You do good work Esoom, how would you like a full time job working for me!”
“No thank you Watto, I prefer to be somewhere greener and less sandy. But maybe you should think about selling your slave for a profit to someone that would care for her. She seems not to want to work without her family anymore.”
“Hey don’t tell me how to run my business and I won’t tell you how to run your!” Watto snapped back. “The trade will happen tomorrow at your ship at suns up. Make sure you are ready, the Hutts do not like to wait.”
“Who are the Hutts?” Esoom asked.
“You never heard of the Hutts! What asteroid have you been living under? The Hutts control everything on this planet. Just be polite and courteous and everything should go without a hitch. I will be there myself just to make sure.” Watto said trying not to show a smile.

Next up the Hutts!

What a great story! It's such a labour of love! This is why you're a "true Star Wars fan" and not some sniveling hater. You found the joy in the fandom aspect of SW and are taking it to a whole new level.