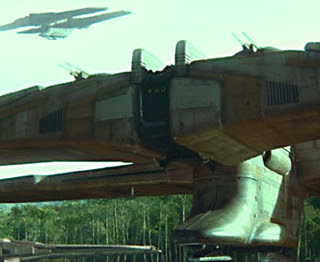 Returning to the area were they had parked the ship the day before they saw it still standing in the same spot, nothing looked different except for the guns on the tip of the front wings have been removed. The other landing craft that were surrounding it were already being dismantled by the other salvage companies and hauled away.
The last of the Naboo techs were just coming down the front ramp of Esoom’s ship from trying to work out the bugs on the new hyper drive they installed. One of the techs approached Esoom as he disembarked from the speeder that brought him.
“You must be Esoom!” The tech said as they both shook hands. “We got the hyper drive installed and most of the bugs worked out but it was not designed to work on a ship this big with such small engines.”
“That is fine sir, you have done more than enough.” The Ithorian said.
“There are a few things you should know, First the Pilot droids are in standby mode. They will follow the orders of who ever reactivates them so make sure it is you. Second this ship was not designed for hyperspace travel so take it easy and no fancy maneuvers. Lastly the turrets are disabled so don't go getting in any fights, you can’t shoot back and you can’t outrun anything faster than a Gungan Kaduu.”
“I understand sir, and thank you for all your help.”Esoom said
The tech started to walk off but turned around and hailed Esoom to tell him one last thing. “Oh! By the way, one of the other Ithorians came by earlier and left a package at the top of the ramp for you.”
Esoom proceeded to walk up the foot ramp past the gapping maw of the huge doors; there he saw the same container that Patches was caring just two days earlier. There planted inside was a small sapling cloned from the original plant with a note attached. The note read “Esoom, we are sorry we had to exile you but you know the law. We will contact your family and friends for you when we return to Ithor and let them know of your situation. Please take this cloned plant sample with you on your journey as a reminder that we look forward to your return after you have learned to control your thoughts and your anger. May Mother Jungle guide you.”
Esoom showed the plant to Patches then hugged the plant close to him as he proceeded up to the control center. Patches followed behind him on the way up but was told to wait in the doorway of the control room till he was called for. The Ithorian set the plant next to his droid friend and proceeded into the room were the Pilot droids were. The droids stood tall with their heads and arms pointing straight down and completely motionless.
“Attention Droids! "Esoom snapped. The droids sprang to life and looked towards his booming voice. “I am Esoom Mendo and I am your new leader. You will take orders from only me from this point forward! Do you understand!”
“Roger, Roger!” The OOM series droids all said in unison as they saluted their new commander.
“If you are lucky, and you have proven yourself loyal I just might free you from the confines of the floor in front of you. If I find out you are plotting against me I will let my little friend Patches over there play kick the droid with your heads! Do I make myself clear!”
“Roger, Roger!” The droids said again in unison.
“You will also take any orders that my astromech friend here gives you unless I say otherwise.” Esoom said waving his friend to come over. “Ok everyone lets get this bucket airborne! Patches, will you do me the honor of inputting the coordinates in the new nav computer.”
Patches whistled happily and went over to the new nav station computer bank and plugged himself in. The blue shouldered pilots started pushing buttons and flicking dials. The ship shook slightly as it started to rise up into the air. The huge landing area doors closed as well as the landing gear as soon as the C-9979 made it past the tree tops. The ship continued to climb up into the atmosphere then into the stratosphere.

Soon they were in space heading away from the planet. The ship slowly glided past the remains of the Trade Federation Droid Control Ship where their ship probably originally came from. The salvage crews stopped to look at the huge winged ship floating by them as they worked. Esoom made sure to get the registry numbers off a few of the salvage ships in case they might have spare parts they might need at a future date.
Patches chattered excitedly and worriedly at the same time as he confirmed that he was ready to start the jump to hyperspace.
“Ok my friend, whenever you are ready.” Esoom said as he held on to the nearest console just incase.
The ship jolted hard as it started to enter hyperspace; you could hear the hyper drive strain under its own power as it pushed the oversized ship. The ride was far from smooth; the ship lunged and shook every now and then when the hyper drive threatened to burn out. The bridge grew cold as they traveled due to the fact that the ship was not designed to carry living beings let alone travel threw hyperspace.
After some time had past the hyper drive finally gave out and the ship was flung back into real space just minutes before they were actually suppose to drop out. 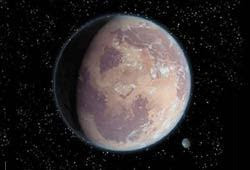 “How close are we to the Planet Tatooine?” Esoom asked out loud. One of the pilot droids turned its head and told him that at full Sublight speed they would be there within an hour or two.
“Good!” Esoom commented back to the pilot then turned to his multi colored friend Patches, “I am going to leave you in command of the bridge, land us on the outskirts of the town called Mos Espa. Then contact me to come join you back on the bridge. I am going to take a closer look at this ship and see if there is anything of use or trade that we did not see earlier.”
Patches nodded his approval and started to patrol the bridge. His new left leg twitching every now and then because the alignment was still a little off. Esoom smiled to himself at how brave his friend was trying to be then proceeded to go back down to the MMT staging area to take a closer look in the wing compartments to see what he could find.
Esoom looked in all four wing compartments but only found parts and pieces of unasembled Battle droids and an array of tools to put them together. He was hoping to find a transport or a tank of some sort but could not find anything. He then went to the rear of the ship to take a look at the hyper drive unit that was installed on top of the Radiant Ion drive engines. It smelt of overheated metal mixed with oil but would be able to be fixed and upgraded as soon as they have landed and gave it time to cool down. This area of the ship was slightly warmer than the rest of the ship so Esoom sat down on the floor next to a wall and started to meditate- trying to center his mind and his thoughts about all that had transpired over the past few days.
Email ThisBlogThis!Share to TwitterShare to FacebookShare to Pinterest