Everything about the con and the droid room was awesome, especially when George Lucas stopped by the room to check out the droids. As Lucas was making his way down the line Patches caught his attention as his dome turned to look at him and one of his pie plates opened and closed. 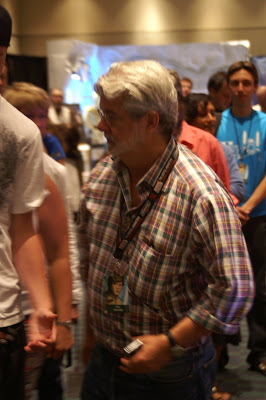 As Lucas came over as Patches followed him with his main eye and chirped softly. Waving at the maker with his brown arms George then looked at the other three colorful droids R2-Central members brought. (Touchdown, R5-TK, and Bane) He then looked back to Patches then to Jen and me and said "Where where you guys when I was making my movies?"

That totally made my day! Thanks to Wayne for making it possible for us to be there when George came by. It will be a day long remembered. 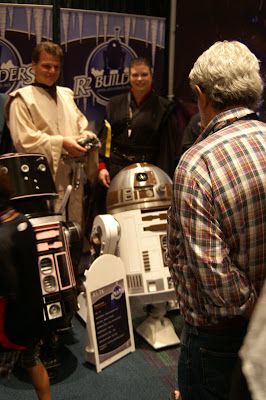 Photos are used with permission from Denman Freeman
Email ThisBlogThis!Share to TwitterShare to FacebookShare to Pinterest

Hah that's just fantastic!!! Congratulations on the comments from George Lucas himself! That would have totally made my day too!